The Mallory Steam Line ticket office is located at 402 Wall Street.  The Mallory Ship Line was formed in the 1860’s by Charles Henry Mallory. and by 1873 it offered freight and passenger service from New York, Key West and Galveston.  Starting in 1876 the ships also delivered mail along its routes. 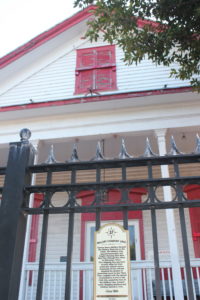 The Mallory Line began with sailing ships which took an average of nine days to make the trip from New York to Key West.  When it converted to steam ships, the trips were cut to four days.  When a ship left New York for Key West, a tandem ship left Key West for New York.  This gave the company the ability to offer consistent weekly service for its passengers and freight needs.  This system required Mallory Ship Line to have at least six ships and at its peak, the Company operated 70 ships.  Its routes were known as the Clyde Line, Porto Rico Line and the Ward Line.

The Mallory Line was the quickest way to Brunswick, GA, from New York at the turn of the last century.  Brunswick was the location of the Jekyll Island club, an exclusive haven for the wealthy at the time.  The ships departed New York every Friday at 3pm and then would arrive in Brunswick Tuesday morning  – a quick 2 1/2 day trip.  An 1890’s booklet titled “To Florida by Mallory Line” highlights why someone would want to travel by steamship.  It states “…the STEAMSHIP invites one with its elegant saloons, its light, roomy and well-ventilated decks for recreation and exercise, its tables ready at stated hours, with the viands [meals] cooked and served equal to the best of hotels, and finally that tonic, that health-giving ozone which the salty air of old ocean alone can give.”  A first class ticket would entitle the passenger to a private room and elegant meals in the dining room.  A third-class ticket (about $10 one-way) would give passengers room “…forward on the main deck. Meals and mattress are furnished with each berth, and only bed covering has to be supplied by the passenger.”

Passengers didn’t travel cheaply.  In 1898 a first class, one-way ticket, depending on destination could run $20 to $60.  By 1912, the Company was part of the Atlantic, Gulf and West Indies Steamship Lines.  The only thing that remains today of the Mallory Ship Line is the ticket office, rebuilt after the Great Fire in 1886.  It was then relocated, to its current position, in 1962. 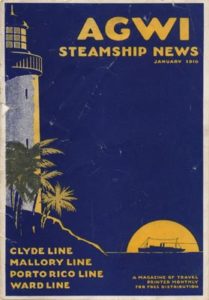