Everyone who comes to Key West, stops by the iconic Sloppy Joe’s for a drink (or two) and possibly a snack.  Sloppy’s is an institution in Key West and has been in its current location since May 5, 1937.  But, what’s really cool about Sloppy Joe’s are their webcams.  Here are 3 reasons why Sloppy Joe’s Key West webcam is the best! 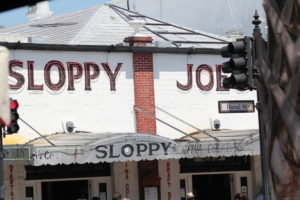 1. You can check out the Live Stage Cam

Want to know who’s playing on stage…. right now?  Check out the Live Stage Cam.  It’s almost like being there…. almost.  You get a front row view of the entertainment, and who doesn’t enjoy the music at Sloppy’s?  Exactly!

2. You can check out the Live Bar Cam

Want to know who’s working?  Take a peak through the Live Bar Cam.  Want to know if you can get a seat?  Then check out the cam… this cam pans across the entire bar so you can hear, and see briefly, the entertainment and check out the crowd.

3. You can check out the Live Street Cams

Admit it… when your home (away from Key West), you pull up the street cams to see what’s going on in town.  I know, we have all done it.  Somehow it reconnects us to the vibe on Duval.  During Fantasy Fest you can take a peak at the crowds on Duval, let’s say it’s very entertaining!  Don’t forget about the Live Duval Street cam too! 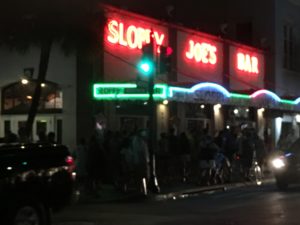 While sitting in Sloppy Joe’s (or watching the webcams) have you ever wondered about its history?  Sloppy Joe’s began December 5, 1933… the day Prohibition was repealed.  Keep in mind, Key West, even in the 1930’s, was a place filled with free thinkers.  So, Prohibition was looked at as an amusing exercise dreamed up by the Government.  Joe Russell was one of those free thinkers, who also ran an illegal speakeasy.  Ernest Hemingway was known to stop by to purchase an occaisional bottle of Scotch and became friends with Joe Russell.

After Prohibition ended, Joe Russell became a legitimate saloon-keeper-proprietor of the Blind Pig … a place he rented for $3 a week.  When the dance floor was added, the saloon was renamed the Silver Slipper.  But, the place was still shabby but filled with good friends, gambling, fifteen cent whiskey and ten cent shots of gin.  Hemingway encouraged the name change to Sloppy Joe’s.

Sloppy Joe’s moved to its current location on May 5, 1937, because Joe’s rent was increased to $4 a week.  At that time, the former Victoria restaurant was vacant.  Located at the corner of Greene and Duval, the building had been built in 1917 and incorporated beautiful Cuban tile work, whirring ceiling fans and jalousie doors.  Joe Russell paid $2,500 for the place.

The bar never closed during the move.  Customers picked up their drinks and carried them, along with every piece of furniture in the place, down the block to its new location.  The new place had the longest bar in Key West.  In the back room was gambling and pool tables.  On one wall was a 119 pound sailfish caught by Hemingway. 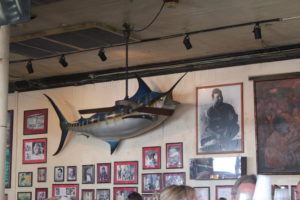 Speaking of Hemingway, plan to be in Key West in July for the annual Hemingway Days.  You can witness the Running of Bulls and the Hemingway look-a-like contest.  Lots of fun for everyone. 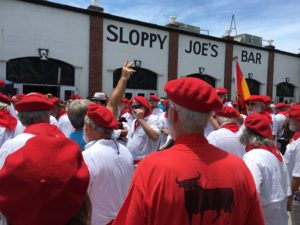 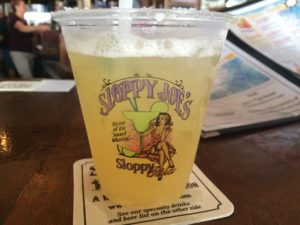 But what draws us to Sloppy Joe’s every time we are in town?  I say it’s the great food, generously poured drinks and the high quality entertainment.  The webcams give us a little peak into Paradise and remind us why we need to book our next trip back…. immediately! 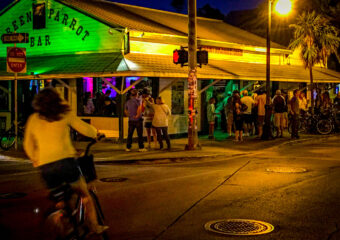 The Green Parrot. The Best Dive Bar in Key West 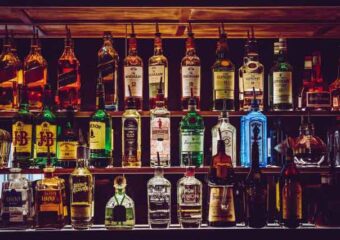 I have always wanted to be a whiskey girl. ...
Read More 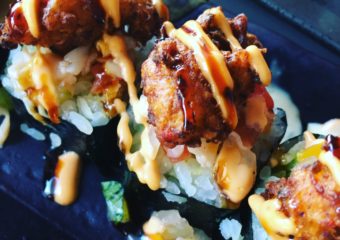 I know, sushi isn't what you immediately think of...
Read More