The Captain George Carey House is located at 410 Caroline Street. It was built in 1834 by Captain Carey. He was a wealthy Englishman who ran a successful seaport bar and wholesale liquor business. He claimed he was a direct descendant of William the Conqueror.

The original house, likely the second oldest structure in Key West, was very small. It had two rooms and a separate cookhouse at the rear of the property.

In 1844 Captain Carey enlarged the house to its current size to accommodate his new German bride. His bride, and her four sisters, were rescued from a shipwreck off the Coast. She and her sisters all married men from Key West. The wreck came to be known as the “Wreck of the German Brides”.  The enlarged home is a example of a Classic Revival Conch House.  The Classic Revival Conch House is a well-proportioned rectangular home with a gabled roof and columned porches. 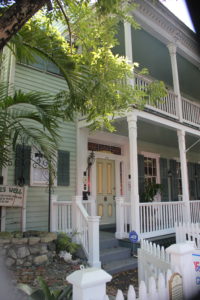 The house has had many owners over the years. In 1934 Jesse Porter (a fifth generation Key Wester) bought the home. Miss Jesse was instrumental in saving many of Key West’s historic structures and helped to create the Historic District. In the 1930’s she under took a major restoration project on the home.  The roof was raised to make room for a third floor and porches were added to each floor.  The dining room doors were rescued from the Royal Palm Hotel in Palm Beach.  All of the windows, on the front of the home, were dutch doors.  They are split in the middle to allow better ventilation as they can act as both doors and window.  She painted the home a beautiful blue-green to reflect the color of the water surrounding the island.  Her home became the hot spot to welcome and entertain many of Key West’s visitors and residents of the day. They included:

Miss Jesse was the center of Key West society and was featured in Life magazine in 1942.  She founded the Old Island Restoration Foundation.  After her death, her family opened the house as a Key West museum.  It highlighted Key West’s impressive history.  Guests could see Miss Jesse’s vast collections and sit for a while and play her antique piano.  It, eventually, became too expensive to maintain and family was forced to sell in April 2010 to Peter Brawn for $2 million.  He also purchased some of Miss Jesse’s collection for an additional $60,000.

The small cottage to the right of the house is named after the poet, Robert Frost, who spent 16 winters there as a guest of Miss Jesse.  Mr. Frost tested, read, pre-screened his poetry to his good friend and philosopher, John Dewey.  He wrote “The Gift Outright” while wintering in Key West.  He recited the poem at President John F. Kennedy’s inauguration.

The Pirate’s Well sign is proudly displayed in the front of the house.  This spot is where the first fresh water on the island was found by pirates in the 1700’s. 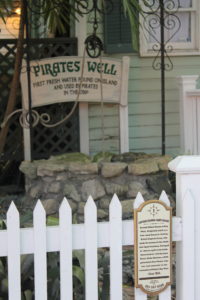