The house is located at 429 Caroline Street between Duval and Whitehead. 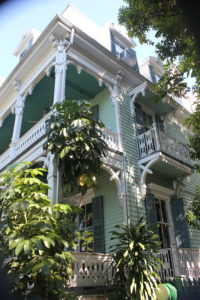 Originally built as a two-story house in 1839 a third floor was added in 1870.  The new design featured a mansard roof and gable dormers.  The mansion is now a mix of Bahamian, New England, and French architectural styles.  It is believed Judge James Webb built the house.  He was the first Federal judge of the New Superior Court of Key West taking the post in 1828.  In 1838, Judge Webb sold the house and moved to Texas after retiring.  He became the Secretary of State of that republic before Texas was admitted into the Union.

Florida’s first public health officer, Dr. Joseph Yates Porter lived and died in the house.  Dr. Porter lived in the house for 80 years.  He died in the same room he was born.  Dr. Porter was instrumental in discovering that yellow fever was carried and spread by mosquitoes.  The house has Dr. Porter’s namesake as he was the first native-born physician of Key West.  He studied medicine at Jefferson Medical College in Pennsylvania, graduating in 1870.

Dr. Porter’s father, Joseph Porter, bought the house in 1845.  He was from Charleston, South Carolina, and had married Mary Ann Randolph.  Dr. Porter was born in the house in 1847.  His parents died at young ages.  His father at 32 and his mother at 30, so he was raised by his grandmother.

Dr. Porter served in the Army Medical Corps for 19 years and became the first state health officer of the Florida State Board of Health and remained in the home until his death in 1927.  During his time with the Army, he was stationed as acting assistant surgeon at Fort Jefferson in the Dry Tortugas, where the famous Dr. Mudd was imprisoned for treating John Wilkes Booth after the Lincoln assassination.

He married Louisa Curry, the oldest daughter of William Curry, who had come to Key West from the Bahamas in 1847 and considered the richest man in Florida.

Dr. Porter and his wife, Louisa, extensively remodeled the home.  Part of their remodel was adding the third floor.  The dormers provided ventilation.  They also added small balconies with fancy wrought-iron decorations, along with lots of Victorian trim.  Porches were added to the rear of the home, which has now been enclosed.  This home is one of the better examples of how in Key West a very plain, classical home has been completely transformed into an entirely different architectural style.  Today the home’s upper floors are converted into apartments with the first floor reserved for The Porch and The Other Side.

Their children became prominent citizens of Key West.  Their son, William Porter, amassed a large number of real estate holdings.  Their daughter, Jessie Porter Newton, was very active in the restoration and preservation of many Key West homes.  She was one of the original founders of the Old Island Restoration Foundation.  She painted the home (along with many others) emerald green to reflect the sea surrounding the island and trimmed the home in white to suggest whitecaps.

The home was added to the US National Register of Historic Homes on June 4, 1973. 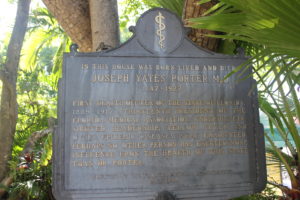