The 1886 fire missed this home by 20 feet.  This home is located at the corner of Fleming and Simonton streets. 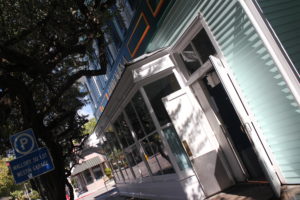 James Haskins, a butcher, decided to remodel his home in 1889 and make the first floor a “Gent’s Goods” store.  Since then, a number of businesses have occupied the first floor including a local gas company, Fausto’s Food Palace and a furniture store. In 1893 the store was occupied by Dr. Burgos’ pharmacy, by the Key West Gas Company in the late 1930’s and Fasto’s in the 1940’s.

In the early 1900’s the home became a boarding house.  In the 1950’s it was converted to family apartments.  By the mid 1970’s the home was a rundown ramshackle warren of partitioned cubbyholes known as “Q-Rooms” or quiet accommodations.  Rented on a weekly basis the twenty-one sleeping spaces shared three bathrooms.  Around this time, an order of Catholic nuns in New York (which one of James Haskins’ daughters belonged) inherited the building from the family.  Upon her death, the church sold the building.

Then in 1987, Eric deBoer and Richard Manley purchased the building and spent $1.5 million to restore and add another wing.  In 1993, they bought the two adjacent buildings and spent an additional $2.2 million to renovate them and integrate them with the existing building. 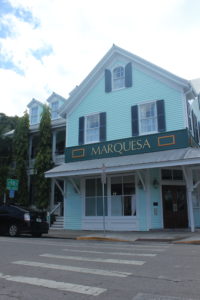 Since 1987, the building has been home to the Marquesa Hotel and Cafe Marquesa.