Located on the 1100 block of Simonton Street you will find one of the first successful industrial communities in the United States.  Between 1880 and the early 1900’s, Key West had a large influx of Cuban expatriates.  They were escaping the oppression of Spanish rule in Cuba.

At that time, there were 200 cigar factories in Key West and they all were able to pull experience and talent from this large pool of expatriates.  But, all of this influx of people caused a housing shortage in Key West.  This was the backstory for Gatoville being built.

Edward H. Gato is the creator of this successful industrial community.  He wanted the best cigar rollers working for him so he could, in turn, sell the best product.  He built 40 cigar maker cottages which ensured he could have the best talent working for him.

These houses were simple wooden structures with two rooms and a porch facing the street.  Each had its own outhouse too.  These were very luxurious for the times.  Gato also supported his worker’s entrepreneurial and community spirit.  He encouraged them to start businesses of their own.  These businesses included grocery stores, saloons, confectionary shops and private schools. 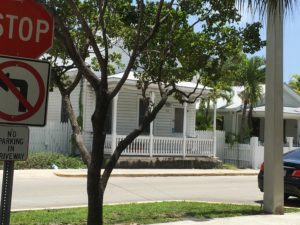 Gatoville was much different that some of the other industrial communities found in the United States.  Coal company towns were more on the prison camp end of the spectrum.  While others like Gatoville and Hershey Chocolate company were meant to woo workers with their fancy amenities.  Hershey’s homes had indoor plumbing as well as central heat.

Keep in mind, some of these industrial communities still exist today.  Hershey is one that is still going strong.  FaceBook and Google have also adapted this community concept.  They often provide housing, amenities and transportation for their workers today.

Overall there have been about 2,000 company towns across the United States.  Take time to stroll down this section of Simonton and step back into another time where cigar makers and their families lived and worked.  Another reason to step off the beaten path in Key West.