Sponging – More Than a Shopping Trip

At 1 Whitehead Street you will find the Key West Sponge Market.  Given it’s location, you will find all of the normal tourist shopping items.  Key Lime products, nautical stuff and of course, sponges.  Lots and lots of sponges.  Here you will find natural sponges harvested in Florida.  They range in size, texture and color.  The Bath sponges are the perfect size for a bath …small enough to fit in your hand, but large enough to create a full lather.  A Sea sponge can be used for larger jobs or if you prefer a stiffer feeling sponge.  The bath sponge is usually a little softer.  Sponges are very much a personal choice and the best part about the Key West Sponge Market is there are a lot to choose from.

Be sure to check out the sponge museum located in the store… because you will really want to know why there are sponges in Key West.

History of Sponging in Key West

Sponges were first discovered in the Florida Keys in the 1820’s.  Locals would find them washed up on the shores after a storm. At first, they were only locally traded.  Soon a rich, thriving sponge bed was found off the Florida Keys and an industry was born.  Even though the waters around Key West were filled with sponges it was difficult and expensive to get them to market.

Key West was able to ship its first sponges to New York in 1849 which started an industry that lasted 50 years.

In 1904, Greek immigrants came to the Keys to pursue sponging.  They used primitive diving suits with heavy lead boots.  These boots allowed them to reach sponges in deeper waters.  Local fishermen, correctly believed, the use of the heavy boots would damage the young sponges and would reduce future harvests.

The use of the diving suits, over fishing and the spread of a deadly sponge fungus ended the island’s sponge market.

How are sponges harvested?

Sponges grow in sponge beds in 20 feet of water.  To harvest, a pole with a pronged rake on the end is used to snare the sponge.  Today, much care is given to harvest responsibly so the sponges can regrow.

“Hook boats” are small boats used by fishermen to navigate the sponge beds. 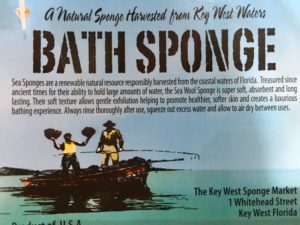 New beds were found later off of central Florida and the industry moved to Tarpon Springs where it still thrives today.

The 1953 movie Beneath the 12 Mile staring a very young, Robert Wagner was shot in Key West.  The movie tells the story about the sponging industry and was one of the first movies filmed in CinemaScope.

One of my favorite things about Key West is the how culture and history is weaved into the everyday.  The Key West Sponge Market on the surface is a tourist trap, but underneath, you learn about sponging and, in turn, learn about one of the many industries that have driven the Key West economy.

If you spend anytime in Key West, or learning about its history, one thing is for certain and that is change.  Stop by the Key West Sponge Market and buy a sponge and be sure to spend time walking around the store … never know what else you might find you can’t live without! 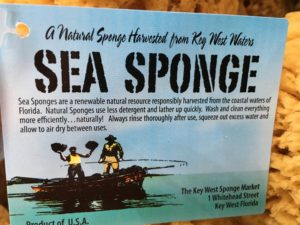