Located at 500 Simonton Street is the Oldest Drug Store.  This is one of the oldest commercial buildings in Key West. 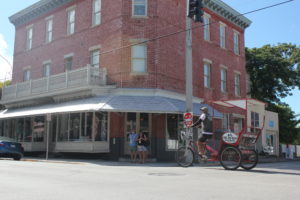 Dr. John Maloney opened the Key West Drug Company in 1903.  He purchased the adjacent building, at 532 Fleming, in 1908 opening the first public hospital in Key West.  Then in 1911 he acquired the building located at 504 Simonton.

The exact date this building was built is unknown, but it can be found on city maps dating back to 1849.

Dr. Maloney was the surgeon for the Florida East Coast Railroad during the building of Henry Flager’s Overseas Railroad to Key West.

A construction explosion in 1908 sent many of the injured workers to Key West.  The Island could not handle all of the patients so Dr. Maloney quickly set up beds in his office building located at 532 Fleming.  This emergency cemented in Dr. Maloney the idea for a hospital to perform surgeries.  It is believed with the help of Henry Flager, he purchased the office building, and moved it to the back of the lot and enlarged it.  The hospital opened October 6, 1908 and was named the Louise Maloney Hospital in honor of his wife.

The hospital’s operating room had a cement floor and was fully equipped.  The hospital had 30 beds and while open it treated over 600 patients.  Mr. Upton Sinclair was a patient, for a short time, and while there adopted the orange and milk diet.

The hospital became too small so Dr. Maloney bought the adjacent home at 504 Simonton and connected the pharmacy and the hospital on Fleming with an elevated walkway.  Upon Dr. Maloney’s death, in 1916, the hospital was renamed the John B. Maloney Memorial Hospital.