Located at 336 Duval (Corner of Eaton and Duval) is the Oldest Schoolhouse also known as the Patterson Baldwin House. 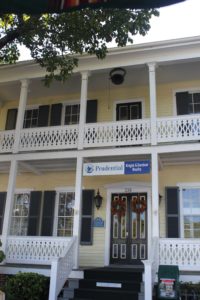 It started as a modest one and half story cottage with a front and side porch.  It was moved to this location after the devastating hurricane in 1846.  It is believed to be one of the oldest structures in Key West – as it was originally built around the time of the Oldest House.  Alexander Patterson, a one time mayor of Key West, moved the home.  After the hurricane, most of the buildings in Key West were either damaged or destroyed.  Building materials and skilled carpenters were hard to find and many of the surviving structures were moved to nearby streets.

During this time, Mr. and Mrs. Pinkney lived in the cottage where his sister Madame Passaloque began the Island’s first schoolhouse in 1847.  The school bell still hangs above the second story porch.  Madame Passaloque conducted classes in the schoolhouse until 1860.  She was ahead of her time as the Florida public school system was not organized until the 1870’s.

Then, John P. Baldwin purchased the property 1860.  Mr. Baldwin claimed to be a member of a British aristocratic family.  His wife was a music teacher and their three daughters were teachers too.  During the Civil War the Baldwin’s moved to the Bahamas, but returned at the end of the war.  In 1867, they enlarged the home with a two-story addition in the front.  The home remained in the Baldwin family for 102 years.

The home has Classical Revival and Bahamian architectural elements.  It has a metal shingle roof, a two-story galley, hand-sawn balustrades and elongated windows and shutters.

Joan and Edward Knight bought the property in 1962.  A fire had heavily damaged the schoolhouse portion of the building and the main structure was in poor shape.  The enthuse the citizens of Key West to purchase properties and restore them, Mr. Knight completely restored the facade and landscaped the front yard.  He left the Eaton side boarded up with the side yard full of weeds.  He put up a sign that said “Before and After House”.

His campaign captured national attention when the National Trust for the Preservation of Historic Homes published photos of his project to inspire others.  The Knights restored many buildings in Key West which was the beginning of the Key West Historic Preservation program.