“Since it first shed its light in Key West, it has like a star of the sea to the wandering mariner, been a star of hope and comfort in times of despair and sorrow, and a star of joy to those who have lived in its teachings.” 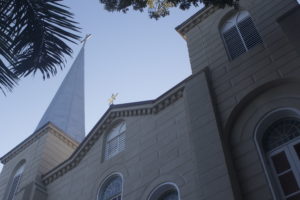 This first church was destroyed by an arson fire in 1901. The present church’s was built in 1905 with an exterior design that represents the eclectic period of American Victorian Architecture and is reminiscent of a modified early renaissance revival building with rusticated exterior walls, round arches, and lunettes filled with transitional gothic arches, louvered shutters and colored glass windows. Many interior elements have both Romanesque and early Renaissance characteristics. Step inside to view its most striking feature, the stained glass window behind the altar depicting the church Patroness, St. Mary, Star of the Sea.  The Church is made from, and upon, oolitic limestone rock.  Care was taken to make the Church cool and comfortable.  High and wide doorways were set along the East and West walls to allow for cross ventilation.

Looking back into the Church’s history, it has undergone many transformations.  In 1844, the Catholic population in Key West was 15 families; no more than 100 people.

October 10, 1846 a Havanan priest celebrated the first mass in Key West.  By 1847, with the influx of people to build up the federal military instillations, it became clear Key West needed a Catholic Church.  Mass at this point usually was celebrated in City Hall.

Construction of the original Church began in 1851 under the direction of Father Kirby on the corner of Duval and Eaton streets. 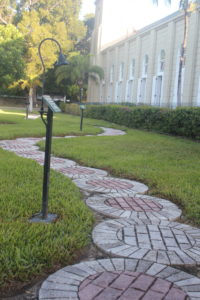 Five Sisters of the Holy Names of Jesus and Mary from Montreal, Canada were sent to Key West in 1868 to open a school for girls and a convent.  It was the first and longest running Catholic school in Florida.  At first the school was in an abandoned army back out of town.  Then in 1874 the Sisters purchased the land for the present site for $1,000.  It was eight acres and a Conch style school was built names Covenant of Mary Immaculate, later re-named Mary Immaculate High School.  It was open from 1886 to 1986.

The current day Parish Gift shop was a Cuban Chapel originally located on Duval and later moved to its current location.

The Spanish American War began in 1898 with the sinking of the Battleship Main in Havana Harbor, Cuba.  The wounded and dead being brought back to Key West prompted Mother Mary Florentine to offer the Convent, two school buildings and the Sisters personal services at the disposition of the Navel authorities.  In April 1898, the Convent was transformed into a hospital.  The parlor became a drug store, classrooms on the first floor were wards for the wounded.  The second floor became the operation rooms.  There was a staff of nine doctors with a 500 bed capacity.  The Convent was now known as the Key West Convent Hospital.

On September 8, 1919, the worst storm in the Island’s history hit.  Over 400 lives were lost.  On May 25, 1922, the Grotto containing the statues of Our Lady of Lourdes and Bernadette were dedicated.  The Grotto was built under the direction of Sister Louis Gabriel.  During the dedication ceremony, Sister Louis Gabriel said as long as the Grotto stood “Key West would never experience the full brunt of a hurricane”.  As most residents will attest, Key West has not experienced a severe storm since the Grotto was built. 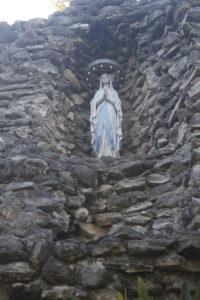 On February 11, 2012, St. Mary, Star of the Sea was named as a Minor Basilica by the Vatican.  This makes it the “Pope’s parish church” in the archdiocese.  A Basilica is a title of honor bestowed on a church of historical and spiritual importance.  There are four Major Basilicas in Rome and 72 Minor Basilicas in the United States.