There is an unassuming concrete building next to the Southernmost Point.  Most people will pass it by without a second thought.  But, take time to read the plaque and understand its history.  This cable hut was built on the mainland and transported by the Flager Railroad to its current location in 1917.

The purpose of the cable hut is to protect the connection between the land line and 125 miles long underwater telegraph cable lines connecting Key West and Havana, Cuba.  These lines were operational until 1987 when they stopped working due to the effects of the harsh marine environment. 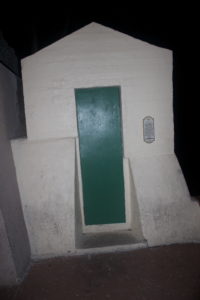 Western Union became the dominate telegraph company in the United States and entered the submarine cable world in 1873, when it purchased the majority of the International Ocean Telegraph Company (IOTC).  The IOTC’s lines were used when John Atkins called Cuba on Christmas day in 1900.  This was the first international call.  What was the response of Cuba?  “I don’t understand”….

The remainder of the IOTC was purchased by Western Union in 1957.  Back then a cable ship was used to repair the cables connecting Key West and Cuba.  The CS Western Union was built in 1939 and was chartered from Thomson Enterprises of Key West to be the cable ship for these lines.  The ship sold out in 1974 as it was no longer needed. 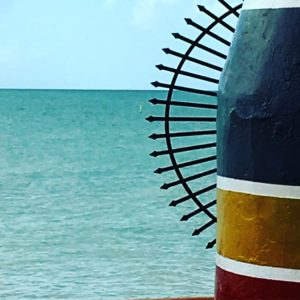 The Western Union is 96 feet in length and with its diesel engine and sail had a maximum speed of 8.5 knots when it worked as a cable ship. 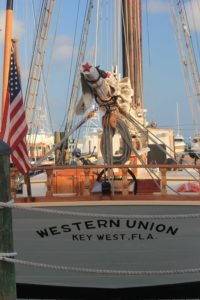 In 2004, the ship was used to take out tourists for day and sunset sails.  The Captain would show the passengers cable which was laid by the Western Union.

In 2007, the ship is restored by the Schooner Western Union Preservation Society which has her out sailing again by mid-2008.

By January 2010, she is under going another restoration and is relaunched mid-year.

February 2012, the State of Florida Legislature designates CS Western Union as the official flagship of the State.

In February 2017, she is undergoing another restoration.  You can follow her progress and current status on the Schooner Western Union Facebook page.

As I learn more about Key West’s history, I am always amazed how interconnected the Island and its people are.  This unassuming concrete hut leads us to the Historic Waterfront and to the Western Union.  When you walk by this magnificent ship you would not make the connection to this hut.  When you are standing in line to have your picture taken at the Southernmost Buoy, take some time to look at this hut and admire it’s historical connection to this Island.