The Freeman Curry House is located at 724 Eaton Street.  Although, not open to the public, the home is a great example of how a Classic Revival home looks like it belongs in Key West.  The home shows its Bahamian influence, like a lot of Key West homes.  There are under-eaves brackets in the Italianate style along with the transom and paired doors keeping with the style. The double porches are welcoming and offer spots to sit in the shade. 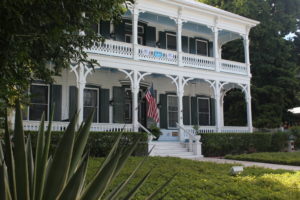 The Freeman Curry House was built in 1865 by Samuel Filer.  He was a shipbuilder and a merchant and used Dade County Pine to construct the home.  He and his wife, raised their four children in the home.

Unlike a lot of Key West homes, this home has only been sold once.  In 1920, the Freeman Curry family purchased the home.  T. Jenkins Curry and his wife, Muriel Louise Thompson purchased the home from the Filers, having moved to Key West from the Bahamas.  Mr. Curry was a descendant from the Curry family.  The Curry family were Loyalists during the American Revolution.  They fled the Carolinas to the Bahamas and were given a land grant from Charles III.  Mr. Curry had a businesses in Key West and served as a County Commissioner from 1938 to 1940.

During the last century, this family has been very politically active. Six members of the family have been elected to local, county and state positions. The Monroe County Courthouse is named the Freeman Justice Center in their honor.

When the Currys moved into the home, they began to a remodeling project.  First, the home was moved back forty feet, to its current location.  Then the outdoor kitchen and outhouse were moved inside, along with running water.  Since the home was made of Dade County Pine, including the walls, floors and ceilings, it retained an older look.  This older paneled look was not popular during this time, so the walls were covered in beaver-board, a decorative material.

The home has double parlors, which double as the living room and ballrooms.  They are adorned with wall murals painted in 1925.  The well known Key West artist, Joaquin Barroso, was commissioned to paint the walls with scenes from the Curry’s life.  The room looks like a museum.

The Currys divorced in the early 1930’s.  Mr. Curry deeded the home to Louise.  The home was then converted to a rooming house.  Jenkins went to live in Key Largo where he was a realtor and co-founded the Florida Keys Electric Cooperative.  Louise ran the rooming house and was famous for her cooking.  The rooming house was prosperous with winter rates at $3 a day or $15 a week.  A few years later, Jenkins suffered a stroke and returned to Key West.  Louise and their daughters, cared for him until his death in 1958.

The Curry’s daughter, Eloise and her husband, William Freeman Sr. later lived in the home.  They raised their two sons, David and William Jr. in the home.  Mr. Freeman was active in local politics too.  He served on the Key West City Council from 1927 to 1944.  William Sr. was a third generation Conch.  His mother descended from Wallis Simpson, the Duchess of Windsor.  William was instrumental in the City buying City Electric.  City Electric brought standardized electric service to the Island.

Take time to walk off Duval Street and absorb the beauty of Key West architecture.  Everyone home has its own story and they are all worth taking the time to hear.

(KeyWestHistoricMarkerTour.org and “Houses of Key West” by Alex Caemmerer)