Located at 616 Louisa Street, the Gato Village Park is a small space set aside for everyone to enjoy.  It’s a pocket park, because its a small neighborhood park tucked into an out of the way place.  Perfect spot to enjoy a Key West afternoon.

The park was part of and area once occupied by 40 cigar makers’ cottages, which surrounded the Gato Cigar Factory.  Found at the back of the park is a representation of a cottage that stood there in 1897. The cigar sculpture is believed to be one of the largest of its type.  It is a monument to the men and women who made Key West the “cigar capital of the world” in the 1890’s. 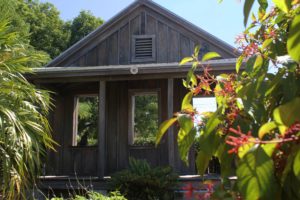 Gato Village was built by Eduardo Gato in the 1880’s.  Gato Village, also known as Gattoville, consisted of 40 cigar makers’ cottages that were built around the Gato Cigar Factory on Simonton Street.  Mr. Gato built the cottages because Key West was at the height of cigar manufacturing, but there was a housing shortage.  These cottages attracted the best cigar artisans to his factory.  He encouraged members of the community to pursue entrepreneurial endeavors.  The community had a bakery, laundry, billiards hall, grocery story and ice cream shop.

The cottage that is in the park today, represents the cottage lived in by Fernando and Serafina Gato.  Fernando worked in the Gato factory.  They had a daughter named Mary who wed a man named Joe Madiedo.  Joe had moved to Key West to work in the cigar industry.  His family was from Tampa and were also cigar makers.  Based on stories by Joe, his daughter, Patricia Gato Madiedo, and her husband, Bruce Neff, built the cottage facade and donated it to the city of Key West.

‘Gato’ in Spanish means ‘cat’, so look for the cat silhouette in the window of the cottage.

Take time to sit on the bench tucked into the park.  Rest and take in the quiet the Gato Village Park offers.  Maybe plan to bring a picnic lunch to be enjoyed on that bench.  Bad Boy Burrito is right around the corner on Simonton.

The cigar sculpture was donated by the Fuente family, Bruce Neff and Patricia Madiedo. 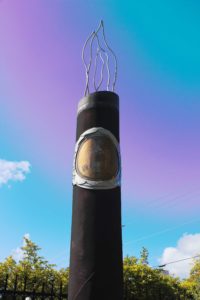 Who were the Fuente family?  Arturo Fuente escaped the Cuban revolution in 1902.  He spent the next six years living near the Gato Village learning how to roll cigars.  He then moved to Tampa and started a cigar factory.  Today, his family owns and operates the largest cigar factory in the world, in the Dominican Republic.

There are many of these small parks, tucked around neighborhoods in Key West.  Explore the back roads, off of Duval, and really take in all that Key West offers.