The John Dewey house is located at 504 South Street.  Although, Mr. Dewey never owned his own home in Key West, he did spend much time in town and lived in three different homes.  His last home is part of the Southermost Resort. 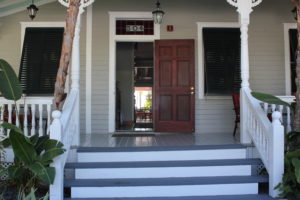 Dewey first travelled to Key West in January 1938, when he was a spry 79 years
old, with his son and daughter. He knew little of the island at the time, but had
headed south for the weather. When Dewey came to Key West, the island was in
the midst of the Great Depression and was little more than a poor fishing
village. The cigar empire had left Key West over a decade ago and in a riches to rags
story was now one of the poorest cities in the state.
Dewey lived in a few homes around Key West, the first being on Greene St across
from Sloppy Joes, which his daughter ended up purchasing for a mere $900. The
last home he lived in, at 504 South St, belonged to his wife, Roberta. She purchased
the beach home on May 29th 1944. Dewey was possibly one of the first snowbirds,
arriving in Key West from his home in New York city every year, from January to
April, simply to break free from the big city.

Although his work habits suffered greatly from his usual productivity in the big city, he was able
to write four works during his stays in his winter paradise. Dewey said “The manana
mood develops very easily here.” He would often write letters saying that the
climate and laid-back attitude was easy to accept and hard to ignore. While
Dewey wasn’t as productive as he might have liked to be, he often justified it
by saying he’s on a lazy vacation anyway. “The climate here is too relaxing to
be conductive to work.”

Dewey frequented the beaches, watching the fishermen bring in their daily
catch, punctuated by sunbathing and sitting on his porch to write. He enjoyed the ability to
simply be here and write, without anyone bothering him. This gave him time to
reflect, think and craft some of his best known works. For most of his time in
Key West he was into his 80s, so the healing properties of the good weather and
relaxed attitude definitely played a part in his active lifestyle.