The Artist House is located at 534 Eaton Street.  It was built in 1887 by Thomas Otto.  Thomas lived in the house for about 40 years and upon his death, his son, Eugene (Gene) Otto received the house. 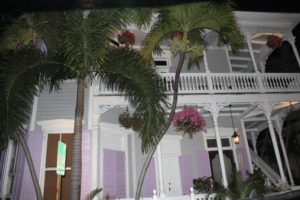 Gene Otto was an artist… thus the “Artist House” name.  While living in France he met his wife Anne.  Anne was a concert pianist.  Anne played at the La Concha hotel when they moved to Key West.  The hotel renamed the room she played in The Rainbow room in her honor as she used to play at The Rainbow Room at Radio City, New York.  The Otto’s were very well known for their lavish lifestyle and parties.  Gene died in 1974 and Anne died two year later in 1976.

The home is a typical Queen Anne style characterized by the octagonal turret over two stories of bay windows and the outdoor staircases connecting the verandas.  The verandas wrap around to the rear of the house and are decorated with corner brackets, turned pillars and very thin and delicate balusters.  Inside there are 15 rooms with 12 foot ceilings.  The home is made from virgin yellow pine and is sometimes described as West Indies Colonial Victorian. 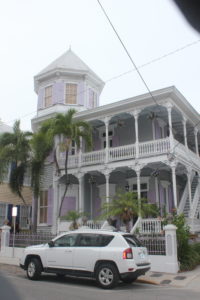 Unusual actives have been reported in the house.  The “encounters” have all been friendly and involved either Anne or Gene’s stuffed doll, Robert.  When Gene was four years old a girl of Bahamian descent gave him a life-sized doll made from fabric and stuffed with straw.  It was reported the girl practiced voodoo and this was a form of retaliation.  Gene named the doll, Robert, after himself.  In the turret they built Robert his own room complete with toys and his own teddy bear.  As Gene grew older, mishaps and bad luck were always blamed on Robert.  The chant began to be “Robert did it”.

When Gene and Anne returned to live in Key West, Robert was still in his room.  Gene used the turret room to paint.  People reported seeing Robert move from window to window and visitors would comment Robert’s expressions would change with the conversations in the room.  Anne didn’t care for Robert and upon Gene’s death, the doll was put into a cedar chest in the attic.  Many years later the doll was found and donated to the Key West Art and Historical Society.

Robert, the doll, can now bee seen at the East Martello Museum; just be sure to ask his permission to take his picture! 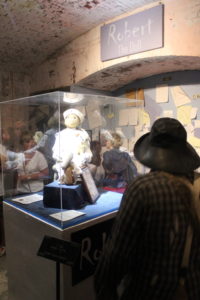 Robert the doll to see..ask his permission to take his picture.