I have always been fascinated with weather.  I took Meteorology as my science in school and loved every bit of it.  It doesn’t matter where you live, you can, and will, be impacted by weather.  Be it a severe winter storm, heavy rains and flooding or a hurricane.

This building represents the vital role weather forecasts played in the growth and vitality of Key West.  Before the weather bureau Key West residents relied on their own measurements and telegraph reports to predict oncoming storms.  The weather station brought access to more sophisticated weather measurement techniques to warn of dangerous weather.

Historical Key West journals show that many of the daily entires recorded wind and barometric pressure.  The preoccupation with weather is certainly justified when you live on a tropical island.

In 1832, citizens recorded daily rain amounts at the Lighthouse.  This was probably more to note the amount of fresh water being collected in the cisterns than about the weather.

What are some of the ways you can predict weather?  Do you use any of these?

Before the weather bureau, it was slow to send out information.  But, with the invention and use of the telegraph during the 1860’s and 1870’s, that all changed.  The first underwater telegraph line was laid between Key West and Cuba in 1867.

The building was built by the US Army and was in use from 1912 to 1957.  Built in 1912, the building was originally on the Fort Zachary Taylor Army base.  In 1947, the base was transferred to the Navy and renamed the Truman Annex Navy Base.  After 1957, the building served as housing for the Navy.

It’s a two-story structure, renaissance in style which typifies the US military architecture and the tropical island location.  In 1977, the building was again transformed and became the WeatherStation Inn. 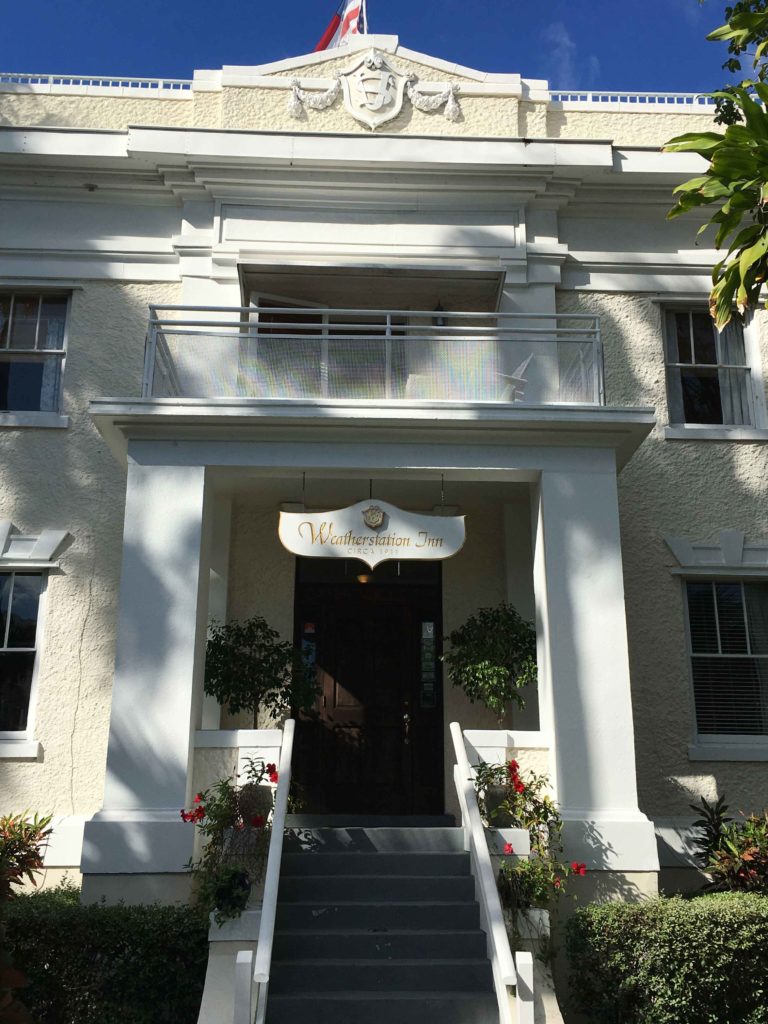 By 1870, a joint Congressional Resolution required the Secretary of War “to provide for taking meteorological observations by magnetic telegraph and marine signals, of the approach and force of storms.” The resolution passed Congress on February 9, 1870 and President Ulysses S. Grant signed it into law.  That law created a new national weather service in the US Army Signal Service’s Division of Telegrams and Reports.

The 1890’s saw the Army Signal Corps had expanded the service to 24 sites and was transferred to the Department of Agriculture and the National Weather Bureau was born.

The current National Weather Bureau building is located at 1315 White Street.  The National Weather Service’s mission is to “provide weather, water and climate data, forecasts and warnings for the protection of life and property and enhancement of the national economy”.

It is a component of the National Oceanic Atmospheric Administration an operating unit of the Department of Agriculture.

Keep an eye on Key West weather with the NWS’ webpage.