Located at 930 Catherine Street is the Ferdinand Hirsch Cigar Factory building.  It’s a nondescript building, which today is being used as a storage warehouse.  During the height of the Key West cigar boom it was one of the largest cigar factories on the Island.

The building was the third and largest building owned by Ferdinand Hirsch.  Mr. Hirsch came to Key West from New York and began manufacturing cigars in Key West in 1892.  Unfortunately, Mr Hirsch only owned the building for four years.  He died in 1901 and after his death, the building was then used by six other cigar manufacturers, including E.H. Gato. 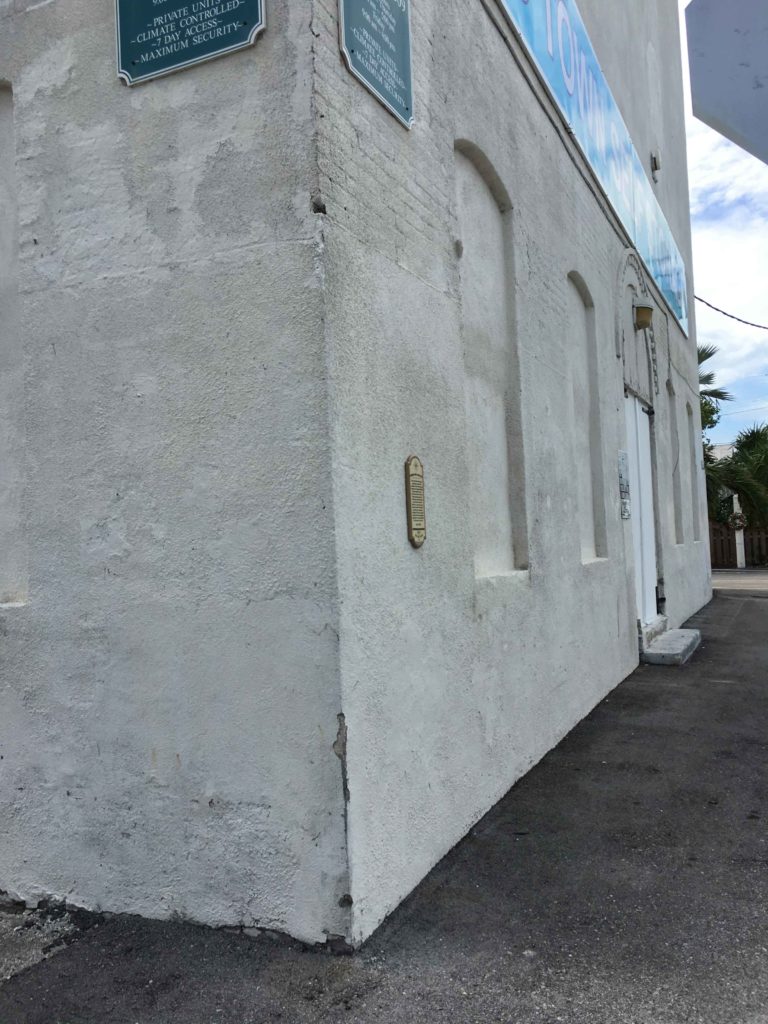 Prior to his death, in 1892, Mr. Hirsch acquired the El Telegrapho brand of cigars from the Key West Havana Company.  The cigar’s label featured a picture of Samuel Morse and was his most popular brand for almost a decade.

It was common for cigar manufactures to change locations frequently as their business grew, brands expanded or business declined.  This building was Mr. Hirsch’s biggest cigar factory in Key West.  The industry had a number of prolonged labor strikes in the early 1890’s.  These strikes were encouraged by the Spanish agents from Cuba.  The thought was if the cigar industry was disrupted, the factory owners (and Jose Marti’s revolution supporters) would not have any money to send to support the revolution efforts in Cuba.

These disruptions led Mr. Hirsch, Celestino Palacio and Charles Baker to establish the Celestino Palacio Trust.  This trust allowed all three cigar manufacturers to purchase tobacco in bulk, at a lower price.  When Mr. Hirsch died in 1901, the trust was dissolved.

Anatomy of a Cigar Factory

Exploring the different parts of a cigar factory:

The length runs east to west so sunlight and breezes stream into north and south windows all day.

Windows on the north side are larger than on the south side.  Constant air flow is created as breezes move into larger openings and out of the building through smaller openings.

Looking at the illustration above –

The water tower held an average of 25,000 gallons of water for plumbing needs in the building including the sprinkler system.

Cuban coffee was delivered by Spanish and Cuban coffeemakers to workers in the morning and afternoon.  It cost a nickel a cup in the 1930’s.

Finished cigars were inspected and selected for uniform color and quality in a well lit room.  The selector was an important position in the factory.

Banders were usually women and were charged with placing paper bands on the cigars.  The brand names on the bands indicated the quality of the cigars.  Newcomers banded the less expensive cigars, while a proven expert was appointed to band and inspect quality brands.

The Lector’s job was to read, local and national newspapers, novels, plays and poetry, and to give out sport scores to workers as they rolled cigars.  Most read in Spanish and often the workers voted on what the lector read.  The most requested works were “Don Quixote”, “Les Miserables” and “The Count of Monte Cristo”. The workers hired and paid the lector, and his position was one of great respect.  The platform he sat on was called a tribuna.

Workers were known to take their lunch breaks outside sitting on the surrounding factory wall.  The beginning of the gastronomic marvel known as the Cuban sandwich reportedly started as the cigar marker’s lunch sandwich preference.  It’s made with roast pork, ham, salami, cheese, pickles and mustard on Cuban bread.

The third level was the area in the building used to prepare the raw cigar material.  Once wetted, the tobacco leaves became pliable and were taken to the strippers.  Raw leaves were divided by selectors into stripped leaves by color and quality, and then sent to the gallery, for the premier and general cigar makers.

The gallery was on the second level.  This was the area of the building in which cigars were manufactured.  Lectors normally were situated along the sides of the workers on the second and third floors.  When the factory was in full production, they spoke loudly on the third floor so they could be heard on the floors below.  While they read, there was absolute silence in the factory.  Many galleries in factories were big enough to provide work areas for up to 500 cigar makers at a time.

The first floor was called floor level.  On this floor was the main administrative offices of the firm along the front section, along with the payroll office, bookkeeping, officer and owner’s office space.  Additional floor space included the loading dock, quality control, banding department, packing, shipping, storage and an equipment repair area.

Basements are not underground spaces found in Key West.  Being so close to sea level, they start at ground level, many have lower ceiling height and are sometimes referred to as the basement level.  The basement was used to store bales of tobacco.  As the bales arrived, they were separated according to quality.  The quality of the tobacco in each bale was marked on the burlap cover with an indicator serial number.  When the bales were opened, the tobacco was  moistened with water to make the leaves pliable.  The leaves were then sent to the third floor to the stripping department to remove the stems and grade the tobacco quality.  Special care was given to the cigar wrapping leaves and they were stored separately.